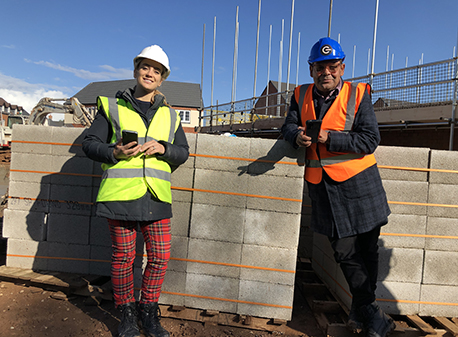 Staffordshire housebuilder Walton Homes has teamed up with Channel 5’s The Gadget Show for the second time to help put high-tech pieces of kit through their paces in a series of durability challenges.

The episode, which is set to be aired later this year as part of the long-running programme’s 34th series, focuses on putting Rugged Phones to the test on a construction site.

Presenters Georgie Barratt and Craig Charles joined the Walton Homes team at the business’ Acresford Park development in Handsacre to put two of the latest Rugged Phones through a series of trials to see if they lived up to their claims of being able to conquer the most challenging of site environments.

Amy Summerton, Director, said: “We worked with The Gadget Show back in 2019 to test a range of trade tech on-site and we were delighted to be approached again and asked if we’d like to help with a new challenge.

“The crew are so much fun to be around, and our construction team enjoyed welcoming Craig, Georgie and to the development to put these phones through their paces. Devising the trials to see if the Rugged Phones lived up to their claims was thoroughly entertaining – we can’t wait to see the episode when it screens.”

Sam Townsend, Assistant Producer for the show, said: “It was great to work with Walton Homes again, we found Amy and the team very accommodating. We were able to achieve everything needed for our test of rugged phones with the team at Acresford Park.”