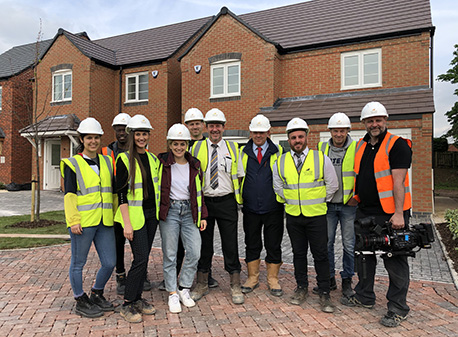 Construction experts at Walton Homes had their skills thrown into the limelight when they were visited by The Gadget Show for a special competitive slot.

Georgie Barrat, presenter on the popular Channel 5 show, and her crew visited two of Walton Homes’ Midlands developments to put a range of technical tools to the test.

Amy Summerton, Director for Walton Homes, said: “We were flattered to be approached to take part in this slot, it was a really exciting opportunity. We have always taken pride in the standard of workmanship our homes involve, but we’re always open to new ideas and this was great fun – and who’s going to pass up the chance to be featured on The Gadget Show?

“The team on-site at Ferrers Chase are currently working to release the first homes at the development, but they were happy to take some time out and try to prove themselves against Georgie and her collection of construction gadgets, while the finishing team over in Stafford were up against a range of floor-cutting and final fix tools, so it was as educational as it was fun when it came to seeing what the marketplace has to offer.  It was quite exciting to see our team on TV – definitely a Friday night worth staying in!”